California and the West Coast Under Volcanic Threat, USGS Reveals 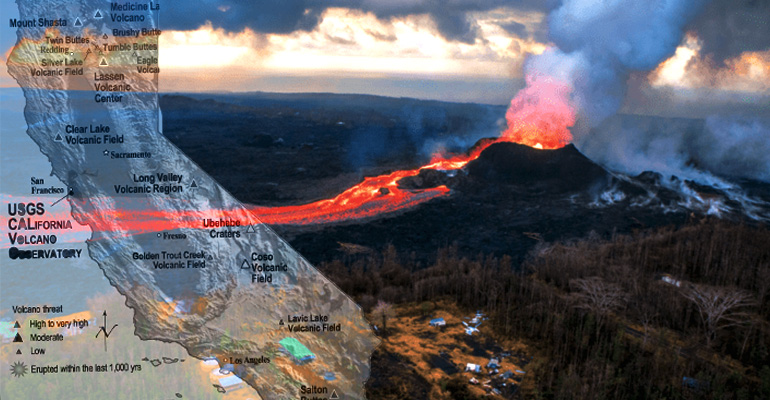 The hazardous event that could turn California and the entire West Coast into a post-apocalyptic landscape could be exactly what they fear and expect less – a volcanic eruption.

After almost a decade of silence, the U.S. Geological Survey (USGS) has warned recently that a volcanic eruption could rock the West Coast anytime in the next 30 years.

Although residents of the West Coast are accustomed to numerous other risk factors that could jeopardize their lives, they are least prepared and informed in the face of an impending volcanic eruption.

The potential for damaging earthquakes, landslides, floods, tsunamis and wildfires is widely recognized in California,” the USGS reports notes. “The same cannot be said for volcanic eruptions, despite the fact that they occur in the state about as frequently as the largest earthquakes on the San Andreas Fault.”

After analysing data from the past 5,000 years, researchers have concluded that a 16 percent risk of a small to medium eruption exists, and that it could occur in the next 30 years or so.

In contrast, there’s a 22 percent chance of a 6.7 magnitude earthquake to happen at the San Andreas Fault in San Francisco in the next 25 years.

What will strike first, we are yet to find out.

The report further stressed that seven of the surveyed volcanoes are considered active, and that an earthquake before an eruption could trigger subsequent deadlier chain of events.

The highlighted volcanoes span from the Oregon boarder to Mexico. They all have their specific risk factor.

If the latter doesn’t ring a bell, you might want to know that it’s considered one of the greatest calderas worldwide, spanning 20 miles by 10 miles into the Sierra Nevada Range.

If it blows up in the near future, there’s no saying how bad the repercussions will be, but the USGS report said that “associated hazards of volcanoes can sometimes last for decades,” making their monitoring of vital importance.

Even more important is to make residents of the West Coast aware of this danger and help them prepare for a worst-case scenario of sorts.

For this reason, a close monitoring campaign is underway, constantly seeking hints of an upcoming eruption.

Right now, authorities are focusing on the next step that aims to assess every active volcano to determine their vulnerabilities and ultimately set a wide emergency plan in place.

Authorities are aware that a volcanic eruption, regardless the intensity, is likely to affect the power grid, natural resources and infrastructure on a larger scale than just California.

With this said, a campaign is underway that will raise awareness of this possible near-future scenario as well as mitigating these risks at community level.

This will require the collective efforts of scientists, land managers, civil authorities, lifeline operators, and communities,” the report outlined. “Only together can California successfully manage volcanic risk and continue to enjoy the beauty and benefits of a geologically dynamic state.”

Every conscious prepper should learn how to fight (or escape) a volcanic eruption, especially those living in California.

If the USGS has become so concerned in recent months, and even forwarded their first volcanic activity updates in a decade, it’s clearly that something of this sort is about to shake America from underneath in the near future.

Do you have an emergency plan in place in case of a volcanic eruption? Do you know what are the first measures you should take in order to mitigate the risks as much as possible?