The worst solar storm to hit the Earth in recorded history happened in 1859. Known as the Carrington Event, it generated auroras as far south as Cuba and caused havoc with the primitive electrical system of that time, generating fires in telegraph stations.

It’s estimated that such a large solar storm will occur roughly every 150 years or so. If one of a similar magnitude were to hit the Earth now, with a society much more dependent on electronics and technology, it would undoubtedly have catastrophic consequences.

Due to this increasing threat, the White House’s National Science and Technology Council has released a National Space Weather Action Plan, in which it details a strategic plan to prepare for an event such as a major solar storm. 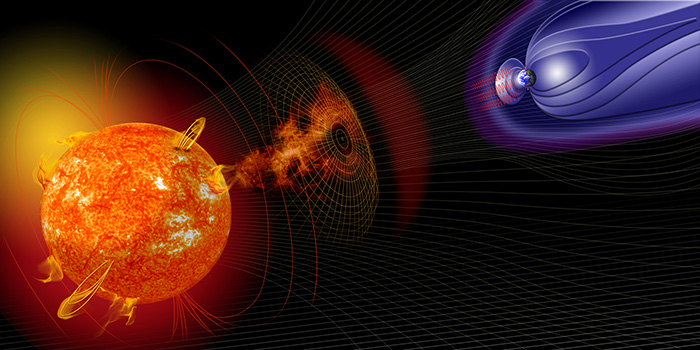 The document warns that with electrical systems becoming increasingly interconnected, if one were to be knocked out, it could cause a cascade of system failures. It recommends a federally-coordinated approach to a number of procedures, from reducing the vulnerability of those infrastructures deemed most at risk, to increasing our forecasting and communications abilities.

The Sun is constantly ejecting charged subatomic particles in the form of solar winds, some of which hit our atmosphere. It is this that causes the northern lights, or auroras, though most of the particles that reach us are deflected by Earth’s magnetic field. Occasionally, particularly large flares will burst from the Sun and the particles will make it through our magnetic field. A recent study has estimated that there is a 12 percent chance that one of these “megaflares” will erupt within the decade, sending a massive solar storm our way.

We’ve already had a taster of what might happen if we were struck by a storm, albeit on a much smaller scale. Back in 1989 Canada got hit by solar storm that created a power surge on the electrical grid. Within 90 seconds this caused the shut-down of Hydro-Québec’s electrical system, leaving millions without power for nine hours. If this were to happen on a much grander scale, the damage would be huge.

One estimate suggests that if a storm the size of the Carrington Event were to hit today, the cost of the clean-up in the U.S. alone would be somewhere between $1-2 trillion (£657 billion to £1.3 trillion) during the first year, with a recovery that could take up to a decade. Every facet of our lives would be impacted, from transportation, communication, banking and government, as we live in an increasingly electronic world.

In fact the danger is so great that the European Space Agency is also working on its own warning system using scientists spread across 14 countries across Europe. At the moment there isn’t actually much we can do if a storm were to hit, except warn the necessary parties of the incoming threat, who could then make preparations, such as shutting down relevant systems to limit the potential damage.

What else do you think the White House should do to prepare for a solar storm? Share your thoughts in the comments section below.