On The Brink of Civil War? Historian Warns We Could Be Closer Than Ever! 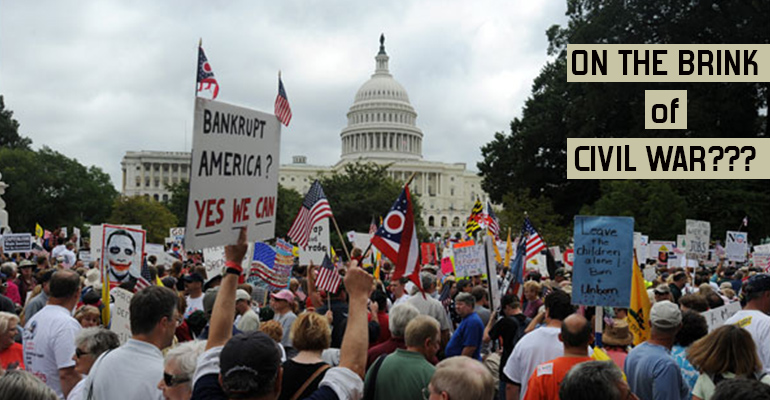 And just how close are we to witnessing another groundbreaking event on American soil?

Whatever may fall, being prepared gives you the upper hand and allows you to control your own personal outcome.

According to Heather Cox Richardson, history professor at Boston College and an expert in 19th century America, the current civil unrest in the country today draws parallels that are “eerily similar” to the time before the last civil war.

This frightening comparison comes after President Trump’s controversial tweet of a statement by evangelical pastor Robert Jeffress, who fears that a possible removal of the POTUS would throw the country in a civil crisis.

After facing impeachment by the House of Representatives due to an alleged abuse of power over the Ukraine-Biden affair, Trump has warned that a possible takeover of his seat by the money-and-power-starved elites could spell civil war.

Following up on Trump’s tweets, Professor Richardson linked the “movement conservatives” to the “slaveholder elites” of the pre-Civil War era.

Richardson argued his vision in a report for Newsweek. These are his thoughts.

“The parallels between the consolidation of elite slaveowners’ power from 1830-1860 and the rise of Movement Conservatives from 1954-2019 are eerily similar,” Richardson said, remarking that they both took power by ‘denigrating black Americans’”.

“Their racial dog whistles won voters and they began to pass laws that moved wealth upward. The more those laws hurt regular people, the more they doubled down on racism against all POC, and then turned on ‘Feminazis,’ all of whom they said threatened white men’s liberty.”

“As they got richer and lost popular support, they came to believe they were the nation’s natural leaders who should rule even as people turned against their policies. They stayed in power by gaming the system: gerrymandering, voter suppression, and a compliant SCOTUS.”

“But that is now crumbling. When Trump threatens civil war, he is not just talking about saving his own hide; he is calling for his supporters to rally around race and gender so they protect the oligarchy that has been gathering power for a generation or more.” – Newsweek

With so much evidence piling up about media propaganda, abuses of power by the elite, Clinton’s body count, and black budget programs funded by tax-payer money, you’d have to be extremely blind to not see that the government is enslaving its citizens.

To cut off the reigns of power that are leading us to a dark and scary place, all while increasing their own area of influence, power, and control, you’ll have to withdraw support and become as self-sustainable as possible.

And I’ll tell you what – in  this day and age it’s as simple as ever to accomplish, considering how technology used properly can enhance our lives for the better. Nowadays, you could earn a living even while living remote, while at the same time ensuring your own safety and a comfortable living environment.

While some parallels outlined by Richardson can’t be denied, things today are far different from what they used to be more than a century ago.

In reality, the only people above us who are exerting authority over the people are those parts of the government… and, of course, the elites behind them who control the government.

After Trump’s tweet at the end of September, a Harvard law professor said this move “was an impeachable offense in and of itself.”

By remaining informed and keeping an open mind, you can see clearly through the propaganda being pushed by mainstream media and the democrats these days.

Mainstream media is filled with retired intelligence officers who are nothing more than obedient government dogs, lying and deceiving the general public at every turn.

Harvard scientists are teaming up with elites to spray our skies with harmful substances that would allegedly combat climate change by reflecting sunlight.

The establishment is unleashing their full range of weapons against Trump. Hillary Clinton is once again raising funds for a 2020 campaign in a desperate move to beat the current president out of office.

Their hunger for power and to control all facets of the state has no limits and their greed would see our great nation burn before they give up.

For this reason, we must stand up and fight for our rights, deny their form of authoritarian control, develop ourselves, teach our loved ones, and become self-sufficient, little by little.

Remember that other like-minded community members are more than happy to lend a hand in your noble pursuit.

And the obedient sheeple are not your direct enemies. They have been deceived and taught to ignore the foundational lie on which society’s pillars have been raised.

Through the power of your own example, more and more people will understand what’s really going on and will start following the healthy ideology our forefathers created.

We’re living in interesting times. And there’s been no better moment to prepare for what’s to come.

It’s not a matter of if shtf, it’s a matter of when it will happen. Stay on your guard, be vigilant and prepare for the worst. It will certainly pay off at the appropriate time.