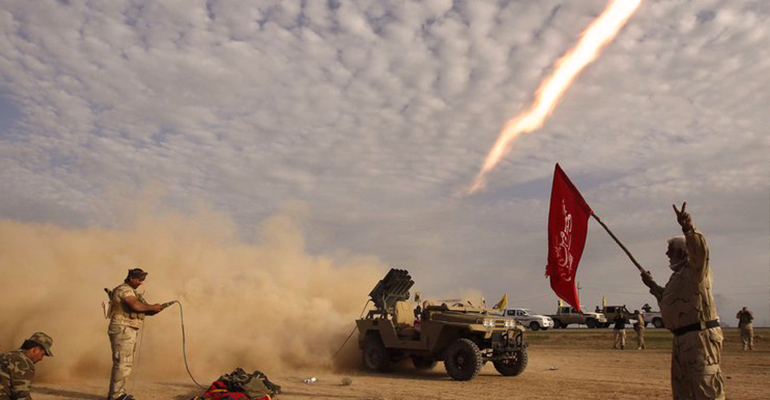 A war with Iran seems inevitable, and the recent false flag operation highlighted by Reuters might just ignite the tinder that will set the Middle East on fire.

In the month of May, Secretary of State Mike Pompeo made a surprise visit to Baghdad, allegedly from fear of Shi’ite militants (supported by Iran) engaging U.S. positions in Iraq.

The Iraqi militants have grown in numbers in recent years, and are now responsible with maintaining security in Iraq.

After positioning a number of rocket launchers close to some U.S. bases, the Secretary of State has urged Iraqi officials to keep the situation under control, unless they want the U.S. to respond with force.

“We don’t want anyone interfering in their country (Iraq), certainly not by attacking another nation inside of Iraq,” said Nike Pompeo during a press release.

But do they really want this fragile peace to hold? Or are they actually hoping for the Iran-backed troops to meddle in the process to provide the perfect alibi for a long-awaited invasion?

As a matter of fact, even after so many years after restoring balance to Iraq, U.S. troops have maintained positions there, despite the insistence of various parties demanding them to leave.

After the Iraqi parliament demanded the U.S. troops to pack and go home in December, President Trump arrived without notice to Iraq only to ignore the country’s officials and instead discuss affairs with his war generals.

Furthermore, the Popular Mobilization Forces (PMF) that stand at the core of Pompeo’s recent warning are viewed as Iran’s proxy and are mainly comprised of Shia militias.

Part of the PMF are the Hezbollah Brigades, the Badr Organization, the Martyrs of Sayyid Brigades, Asaib al-Haq, Jund al-Imam, and others.

During the May 2018 elections, Shiite cleric Muqtada al-Sadr won the most seats in the parliament. His supporters, mainly communists and secular Iraqis, are fierce opponents of any foreign interference in Iraq, “whether Tehran’s or Washington’s.”

Because of this, the U.S. has seen the PMF brigades as a political threat to their influence rather than a direct threat to the remaining U.S. troops in Iraq.

The job of coordinating the PMF groups, as well as integrating them within Iraq’s army, was passed by the U.S. to Prime Minister Haider al-Abadi, who now seems to be losing ground.

The Atlantic reported that the PMF umbrella groups are coordinated by Iran, and can be used as “an effective tool for further escalation – and for reviving an old narrative that casts U.S. troops as an occupying force in the country.”

While Jeffrey Godberg (supporter of Iraqi invasion and editor-in-chief of the liberal magazine) and The Atlantic are insisting that Iranian officials are irritated by the stagnation of U.S. troops in Iraq, it is obvious that the Iraqi regime itself is against all foreign occupation, be it Iranian or American.

However, the corporate war propaganda is showing just one side of the coin in order to provoke another war that would claim countless innocent lives.

Last year, the Trump administration said “the United States will hold the regime in Tehran accountable for any attack that results in injury to our personnel or damage to United States Government facilities. America will respond swiftly and decisively in defense of American lives.”

And “the message was clear,” said a senior Iraqi military. “They wanted guarantees that Iraq would stop those groups threatening U.S, interests.”

Although mainstream media has seen the recent move of PMF groups as an immediate threat, top UK officials disagree.

“I think it’s important to say that many of them are compliant and we have seen no change in that posture since the recent change between the United States and Iran,” he added.

While tensions are rising in the Middle East, the world is holding its breath.

If any of the various parties involve spark this pile gunpowder, it will play out badly for the rest of the world, because there are just so many big players involved with both sides that the situation can quickly escalate to another world war.

Until then, your best bet is to prepare for the worst. Although peace might last for a while, it’s always a good idea to stick to your emergency plan and crisis preparations.

After all, it’s just the preppers lifestyle.