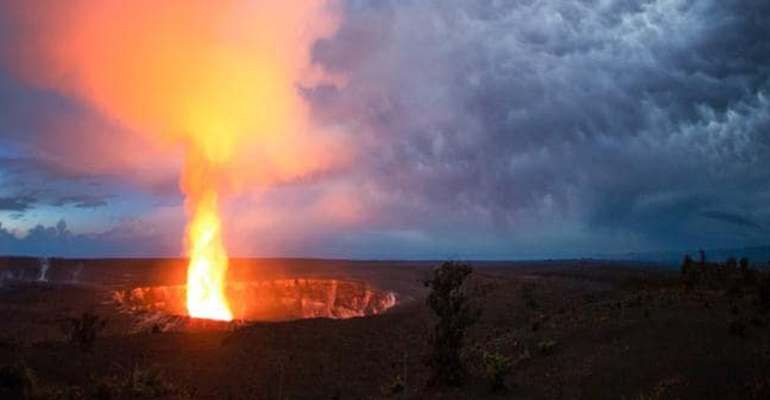 A man overlooking a precipice lost ground and fell inside the caldera of the most dangerous volcano in the U.S. – Kilauea.

What’s incredible is that the man survived the fall and is now resting and being treated in a Hawaii hospital.

While trying to peek over the edge in a restricted area of the Streaming Bluff region, the man found himself freefalling from 300 feet.

Another person witnessing the scene took immediately to authorities who made haste to the scene.

According to the park service, about two and a half hours since the accident was reported, the rescuers found the guy “alive but seriously injured on a narrow ledge about 70 feet down from the ledge.”

After lifting him out of the caldera, a flying crew took him to the medical unit on the island where he received emergency treatment.

The incident could have marked another deadly incident at the Kilauea volcano, with the last one occurring in October 2017.

Crossing safety barriers and entering closed areas can result in serious injuries and death,” he added.

Fortunately (and incredible at the same time), the man had only some injuries after the 7-story-building-equivalent drop.

The main reason for this close to miraculous survival was the fact that the man was a trained soldier at the Schofield Barracks on Oahu who was partaking in a drill on the Big Island that day.

He obviously is doing remarkably well for his fall,” said Matthias Kusch, Hawaii County Fire Department battalion chief, who was also a bit reluctant saying that “only time will tell what injuries he has.”

Among the 18 most dangerous volcanos in the country, Hawaii’s Kilauea is top of the list.

The last time it had erupted was about a year ago when it marked the most powerful and damaging eruption in the last decades.

In case some untrained person would have fallen from a similar height, the odds of surviving would have been very slim.

Learning from the other’s fortunate mistakes, you must realise that it’s never a good idea to cross over the railings in dangerous places, regardless how trained you may be.

Indeed, training the body on a constant basis is a recommended thing to do as a prepper.

Not only can an active lifestyle save from instant death, it can also make you resilient.

Although you might think there are many variables involved in a situation like this, it is pretty obvious that a good physical condition can increase your chances of survival in a similar scenario.

I hope this informative material will save you from becoming a statistic on the news.