On the Brink of WW3? Middle East Conflict About to Reignite 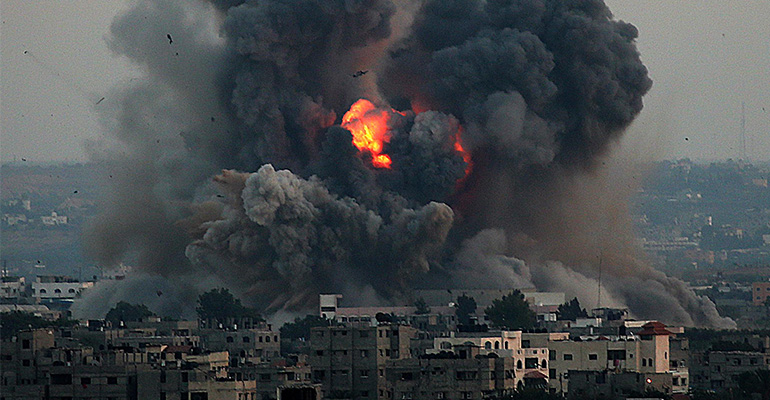 A bloody war is about to erupt in the Middle East, and if other world superpowers pick up sides and join this conflict, it could very well mean the beginning of a new world war.

A couple weeks ago, on Thursday 14th, missiles aimed at Tel Aviv have rocked Israeli ground for the first time since 2014.

Launched by Hamas, the rockets were intended to stir up the waters prior to central Israeli elections on April 9th.

According to the Jerusalem Post, “two rockets were fired towards central Israel on Thursday evening…It was the first time sirens were activated in Tel Aviv since the last war with Gaza in 2014, and several Israelis were treated for shock.”

Israel military has retaliated, directing airstrikes towards Hamas positions. This has led the state of Israel one step closer to another regional conflict.

Unfortunately for them, most of their neighbours are hostile and are waiting for the spark that will trigger a major confrontation.

To see how this can affect the U.S., and the entire world for this matter, let’s have a closer look at what is happening right now in the Middle East.

Hamas is a Palestinian Islamist political and military group that has opposed the state of Israel since its very founding in 1987.

Hamas is governing Gaza independently of the Palestinian Authority, and have failed to come to terms with any Israeli proposition so far, or with the Palestinian government.

Because of their radical view, the Western powers have stopped offering them aid.

The attack on Thursday had no significant casualties, but it served as a direct provocation prior to pivotal elections about to take place in Israel on April 9th.

Meanwhile, the northern Israeli flank is threatened by Hezbollah, another Islamist political and military group of Lebanon, considered a terrorist organization by most Western powers and Arab states part of the Arab league.

According to a recent report, multiple tunnels dug by Hezbollah to prepare ground for an invasion of Israel were discovered.

The five tunnels located so far are allegedly wide enough to mobilize military forces through them, including “heavy military equipment.”

Another report expressed fear of a possible Hezbollah invasion of northern Israel, especially now that their militants have become more experienced than they were in the past.

For the first time since 1973, the Israel Defence Forces (IDF) confronts the very real prospect of a sizeable incursion. Years of fighting alongside Russian and Iranian forces in Syria have transformed Hezbollah into a formidable military force […] This represents a major leap from Hezbollah’s small hit-and-run tactics in the 2006 Lebanon war.”

Fears have sprung from an estimate that Hezbollah has stacked up about 150,000 missiles for when the next conflict will break out.

For a state like Israel, that’s about the size of New Jersey, it’s quite horrendous to think of a darting volley of so many missiles coming their way, and the outcome…

Even though the technology and troops of Israel are far superior to their neighbouring enemies, they won’t stand a chance if they get cornered and outnumbered by the aforementioned militant organizations.

This is exactly where the fear of a WW3 comes from, since world superpowers would have to intervene to mitigate a war directed towards Israel.

And the recent wave of threats doesn’t just stop here.

In a recent press release, Syrian President Bashar al-Assad threatened to resume hostilities with Israel if their troops do not leave the Golan Heights – a rightful Syrian territory under occupation.

With so many challenges lying ahead, Israeli Prime Minister Benjamin Netanyahu is set for a heated election this upcoming month.

If more offensive moves will be directed towards Israel until then, we are yet to find out.

Iranian forces already seem prepared to tackle the Israel issue once and for all.

If the conflict erupts, they are determined to wipe Israel in its entirety.

Our strategy is to erase Israel from the global political map. And it seems that, considering the evil that Israel is doing, it is bringing itself closer to that,” said Hossein Salami, a top Iranian general.

We announce that if Israel does anything to start a new war, it will obviously be the war that will end with its elimination, and the occupied territories will be returned. The Israelites will not have even a cemetery in Palestine to bury their own corpses,” the general added.

In response, Israel Prime Minister Benjamin Netanyahu has urged his Western and Arab allies to take immediate action against Iran.

With darts coming from all sides, it is clear that war in the Middle East is coming. It is just a matter of time until it occurs, and we must all prepare for a possible devastating outcome.

We can pray for peace, but history has proven that this war-torn region of the world cannot stay at peace for long.

And with Hamas, Hezbollah and Iran willing to discard of the Israeli state at all costs, we are appointed to see a bloody confrontation in the (near) future.

But will it escalate to the rest of the world?