Shocking truth revealed: Obama is in league with ISIS

Our commander and chief has betrayed us all. His actions boarder on treason, but most of our fellow Americans are oblivious to this undeniable truth.

They blindly trust in the big media corporations that feed the public with nothing but half truths, disinformation and poor justifications for what our current leaders are doing.

If you take a moment to actually think about what the Obama administration has been doing in regards to ISIS, you will come to a grim and awful truth: The current U.S. government is protecting and possible arming a terrorist organization.

I know that this is real hard to swallow, but I am just looking at the cold hard facts. Let’s take a look at some of them:

1. Barack Hussein Obama is a practicing Muslim. While this alone is not a crime, being part of a religion that is known for its radical and fanatical views, must raise some question marks. He could have easily turned to Christianity, if he truly was a God fearing man. 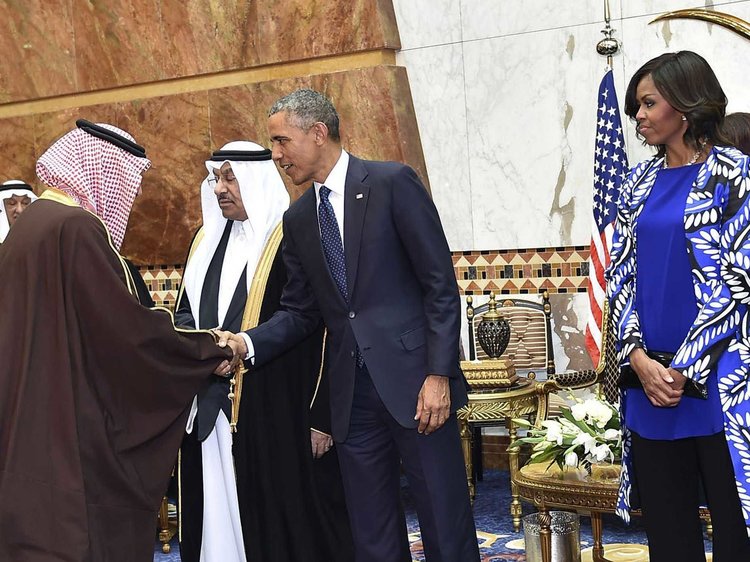 2. The first person he called once sworn into office was the President of the Palestine Liberation Organization: Mahmoud Abbas, a known supporter of Hamas. Hamas sole purpose is the annihilation of Israel and it is a well-known fact the Muslim commander and chief has no love for Israel.

3. Over the course of his presidency Obama has met with members and affiliates of the Muslim Brotherhood hundreds of times, and every time, the meetings were kept secret. The Muslim Brotherhood’s own documents call for the destruction of our beloved country and a worldwide caliphate, so it begs the question, why is the President of the United States of America secretly meeting with a group known for radical views and worst, terrorist ties.

Following the events that took place in Egypt in the Arab Spring, the Muslim Brotherhood has been officially labeled as a terrorist organization, with the Egyptian courts dissolving nearly all of its institutions, organizations and charities.

4. The Arab Spring has been orchestrated by Obama in order to remove from power people with no desire to attack Israel. Let’s be honest folks, the U.S. has had understandings with every dictator in the Middles East. It was something in the lines of: You play ball, we leave you alone. Both former Egyptian President Hosni Mubarak and Libyan President Muammar Gaddafi were allies of the U.S. and had no wish to invade Israel, and that’s why they had to go.

And everything was done by Obama with the help of his Muslim Brotherhood buddies. Don’t buy into the propaganda that they were evil men that oppressed their citizens and that’s why the Arab Spring happened. Yes they were bad men, but let’s face it, in that part of the world there are only two types of rulers: bad and worst. The treatment of the citizens was no news, it had been going on for decades, but now it served as a good excuse to execute a plan that will remove elements opposing Obama’s agenda and place instead loyal supporters of the Muslim Brotherhood.

Such was the case with Egypt were, after Mubarak stepped down, former spokesman for the Muslim Brotherhood, Mohamed Morsi, ran and won the presidential elections. To further help his Islamist friend, the Obama administration send $ 1.3 billion to aid Morsi in shaping Egypt into a base of operation for the Muslim Brotherhood. Unfortunately for Morsi, his term was short lived as he was overthrown by a coalition led by the chief of the Egyptian military, Abdul Fattah el-Sisi.

This did not set well with our president and might be the reason he is so hell bent on removing Syrian President Bashar al-Assad from power. 5. The lack of response in light of the tragedy at Benghazi. In 2012 four Americans were brutally slaughtered by terrorists, among them Ambassador J. Christopher Stevens. And what did our Muslim leader do? He ordered the military to stand down.

In an interview with Lou Dobbs on the Fox Business Network., Adm. James Lyons says that Barack Obama intentionally conspired with America’s enemies to stage a bogus attack on the U.S. compound in Benghazi, Libya, and the bogus kidnapping of Ambassador Chris Stevens. According to the plan, Obama would successfully “negotiate” for Stevens’ release in a prisoner exchange, which would bolster his then-mediocre approval ratings just prior to the 2012 election. This plan would have ensured the release of Omar Abdel Rahman, the ‘Blind Sheik’, the leader of Al-Gama’a al-Islamiyya (also known as “The Islamic Group”), a militant Islamist movement in Egypt that is considered a terrorist organization by the United States and Egyptian governments.

6. The White House has been infiltrated by Muslim Brotherhood members. Once in office, Obama took great care to place several of his Muslim friends in key positions of influence over U.S. policies. Among them Mohamed Elibiary is the one that stood out the most.

From 2011 to 2014 Elibiary was positioned as head of Obama’s Homeland Security Advisory Council. Nice right? We had a known Muslim Brotherhood member, a supporter of Ayatollah Khomeini’s ideology (considered the face of Islamic terrorism) and a long-time friend of Hamas terrorist leader Shukri Abu Baker, who Eliabiary also considers his mentor.

What’s even more shocking is that he didn’t shy from expressing public his believes in regards with America, Christians and Jews. In October of 2013 he actually took to Twitter to announce that the U.S. was a shariah-compliant Islamic country. Other examples of disturbing tweets are these:

Currently Eliaiary is back in Texas working a new homeland security think tank, but in truth this is just another scheme to further racialize and desensitize Texans to the hard-line Islamic ideology.

7. Obama’s ties with ISIS. The Egyptian Minister of Religious Endowments insists that ISIS was birthed by the Muslim Brotherhood and that was one of the reasons Egypt has labeled the Brotherhood as a terrorist organization. What does Obama do in response to this? He appoints known members of the organization in key positions in the White House, he has hundreds of secret meetings with the leaders of the Brotherhood and he invites know ISIS supporters at the Summit on Countering Violent Extremism.

One of the Summit’s attendees was the Islamic Society of Boston (ISB) an organization with extensive ties to terror, including former Cambridge mosque worshipper Ahmad Abousamra who is currently ISIS’s top propagandist, as well as the Tsarnaev brothers who carried out the Boston Marathon bombing. The Cambridge mosque, ISB’s first house of worship was founded in 1982 by Abdulrahman Alamoudi, currently serving a 23-year prison term for his conviction as an al Qaeda fundraiser.

8. The curious case of the missing military equipment. Last year $ 420 million worth of military high end equipment went missing in Afghanistan. No one knows how or where, they just vanished into thin air. David Copperfield could pull this trick off. The working theory for this disappearing act is that they were purposely miss placed at the orders of Obama in order for ISIS to find them.

You don’t think this is possible? You believe that he is opposing ISIS? Let’s remember what was the reaction of our Muslim president to the massacre of the 21 Egyptian Christians that went to Libya in search of jobs carried out by ISIS. He received a letter from his long time pals at the Muslim Brotherhood asking him to denounce retaliatory airstrikes by Egypt on ISIS. What did he do? Exactly what they said, he went on American television and reprimanded Egypt for striking ISIS.

9. Obama keeps referring to ISIS as ISIL. As you might know ISIS stands for Islamic State of Iraq and Syria, while ISIL stands for Islamic State of Iraq and the Levant. Wonder what’s the difference? Well the Levant is the historical name of a large area in the eastern Mediterranean. It includes Jordan, Lebanon, Palestine, Syria, Sothern Turkey and… Israel. So in Obama’s continued use of ISIL instead of ISIS he is showing even more disdain for Israel, and this may very well be the most damming evidence that supports the theory that Obama is involved with ISIS. 10. The shielding of ISIS. Anyone in the military can tell you that Obama is more than cautions when dealing with ISIS and basically prefers to do nothing at all. What even worst is that he doesn’t even help other allies that are willing and able to do something about this fanatical group. When asked by Egypt and Jordan for intelligence and weapons to fight ISIS, Obama denied the help. And please don’t believe that those airstrikes he orders do any real damage. Most of the time they hit empty buildings.

I believe that the evidence speaks volumes in regard to our Muslim leader’s view on ISIS and the Islamic terrorist threat. With Muslim Brotherhood members infestation the White House, the seemingly shielding and supporting of ISIS, the lack of aid given to our allies that want to destroy ISIS, one can truly begin to think that Obama’s ultimate goal is to turn our beautiful God Blessed country into an Islamic caliphate.

But I for one trust that we will not let this happen and we will not take it laying down.