A Social Score System Like China ALREADY Exists in the U.S. 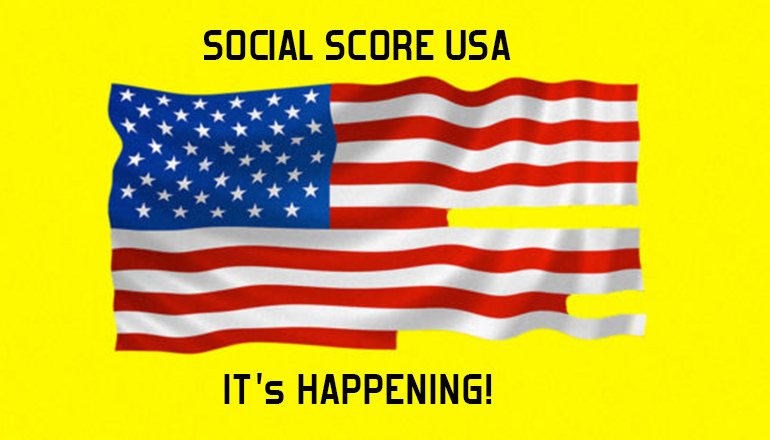 Be careful what you post on social media… and how you behave in society, because you never know when (or why) you’ll be deprived of certain rights and services!

It’s true! A shadowy social score system similar to the one recently introduced by the Chinese is already being tested in the States…and it’s not the government this time.

Big tech companies are the pioneers of social rating in the U.S., and it works in a very similar fashion as the system in communist China.

Before explaining that, I’ll start with a recap of what’s happening in Asia, for those who aren’t aware yet.

The Chinese social credit system is an innovative totalitarian, surveillance-based system of control that seeks to label its citizens “good” or “bad” and therefore limit certain rights or privileges for those who misbehave.

The Chinese government wrapped this up in silver lining by saying they wish to “allow the trustworthy to roam everywhere under heaven while making it hard for the discredited to take a single step.”

Believe me, when the government imposes a certain conduct that citizens must abide to, it leaves a great deal of room for abuse.

Not to mention the fact that it goes against the very notion of freedom itself.

And this invasive idea has pervaded American soil as well!

Make no mistakes. This is not a good thing. It will turn individuals into fake, social-score-grinding machines, just like a famous episode of Black Mirror you may have seen…

That’s far away from the free personal conduct promoted by the Bill of Rights and the Constitution.

If you’ve been disturbed to discover about Communist China’s plans of a near-future socialized authoritarian regime, then you won’t cope well with the idea of an already-existing, parallel and elusively implemented system in the U.S.

Silicon Valley tech giants are leading the way with their social media surveillance, censorship and user policies that can strip users of their rights without being allowed an appeal.

Here are some of the most prevalent examples.

As reported by Fast Company, “the New York State Department of Finanical Services announced earlier this year that life insurance companies can base premiums on what they find in your social media posts.

That Instagram pic showing you teasing a grizzly bear at Yellowstone with a martini in one hand, a bucket of cheese fries in the other, and a cigarette in your mouth, could cost you.

And did you know that Airbnb can terminate your account without reason if it wants to… without allowing you the opportunity to discover what you did wrong?

Their privacy policy says that “this decision is irreversible and will affect any duplicate or future accounts. Please understand that we are not obliged to provide an explanation for the action taken against your account.”

More precisely, if your host doesn’t like your conduct or feels there’s something you did wrong, they can privately denounce you to Airbnb, which can result in the above sanction.

You can end up being shadow-banned by Uber as well! You have the option to rate the driver whenever the ride is over. But are you aware that drivers are invited to do the same for their passengers?

The consequences of a low passenger rating were recently announced in May, and say that, if your average rating is “significantly below average,” Uber will reserve the right to suspend you from using their service.

Last but not least on the list – WhatsApp. The online messaging giant can forbid you from using the app if many other users have blocked you, if you’re sending what they consider as spam, threatening messages or trying to hack or reverse-engineer their system using an unauthorized app.

And while all these measures may seem as protective measures for “good” citizens, in reality, the fight for control over our rights and freedoms has already begun.

Which begs the question… where will the line be drawn?

“Social privileges” will become the new norm in a matter of time, and you’ll have to align to the new standards of society, or else risk being exiled from all the privileges that you enjoy today.

It might not sound that bad if you’re a prepper and already enjoy living remote or in not so densely populated areas, but the government the government can continue to change the rules and make it difficult for those who don’t abide to their new social standard of living.

Do you think these measures will improve the status quo in our society? Will you be able to enjoy a better and safer life by abiding to strict social standards?