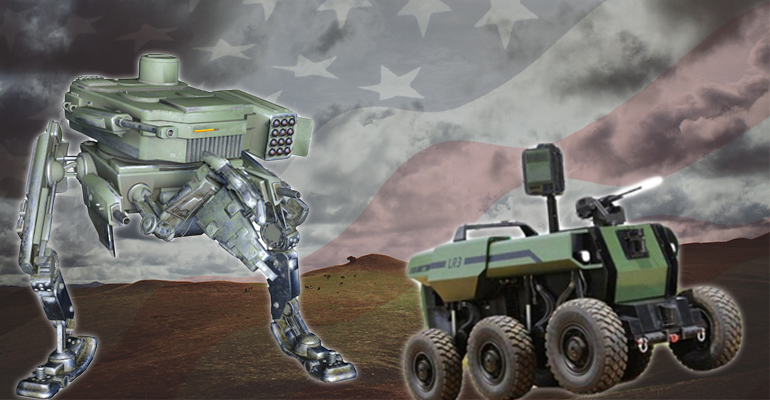 The U.S. Army is paving the way towards a future warfare that, for some, including myself, is much scarier than a nuclear outcome.

You’ve already seen such gadgets doing the killing on screen, and soon enough the science fiction will turn to reality.

In an attempt to enhance their existing military infrastructure, the Army Contracting Command has incentivized both industry vendors and academia to forward ideas that will help complete their Advanced Targeting and Lethality Automated Systems (ATLAS).

The announcement aims to enhance military vehicles in such a way that they would “acquire, identify, and engage targets at least 3X faster than the current manual process.”

The ATLAS system will be based on artificial intelligence with machine learning algorithms that will turn all military vehicles into autonomous killing machines.

But how will this pan out if we take out the only factor capable of deciding who’s good or bad, namely the human being behind the trigger?

We can still rest assured for now, since current legislation doesn’t allow for fully automated machines to be created.

For this reason, ATLAS will benefit from a partially automated system capable of detecting and identifying targets with greater precision, while “parts of the fire control process” will still be initiated by humans, explained Paul Scharre, who is director of the Technology and National Security Program at the Center for a New American Security in Washington, DC.

In other words, the system aims to “maximize the amount of time for human response and allow the human operator to make a decision,” and once “the human makes a decision, to fire accurately,” explains Scharre.

On one hand, this boasts numerous benefits like a decrease in human collateral victims, increased safety for U.S. ground troops, as well as fratricide.

However, on the other hand, giving machines autonomous capabilities could and will have devastating consequences.

If the law doesn’t allow fully automation right now, it can very easily make this happen in the future.

And what would be the most probable outcome? Well, I invite you to see this short, yet extremely explanatory video called “Slaughterbots.”

This is not an act of fearmongering, it’s only meant as a wake-up call for all preppers out there who must know how to tackle the possible challenges of the future.

Apparently, slaughter bots will be one of the main hurdles to overcome in a future totalitarian or post-apocalyptic scenario.

Even in the world of today, any wrongdoer with sufficient resources can employ an attack using autonomous mini drones and never risk its anonymity.

A powerful alarm signal was drawn by Stuart Russel, Professor of Computer Science at UC Berkley, who appears in the above video.

He stressed that “it looks very much as if we are heading into an arms race where the current ban on full lethal autonomy will be dropped as soon as it’s politically convenient to do so,” which is exactly everyone’s thought when looking at the current state of affairs.

When this is done, the barriers to “decide who lives and dies, without further human intervention,” will be gone, therefore crossing “a moral threshold,” explains Russel.

So far, 26 countries have entirely banned the development of new autonomous weapons of any sort.

However, prominent figures like Elon Musk calls for generally accepted guidelines for such devices, and believes that a catastrophe can only be avoided after totally banning such machines.

Unfortunately, as Musk pointed out, wearing a seatbelt while driving wasn’t mandatory until plenty of lives were wasted, which means that only a tragedy involving autonomous devices could lead to some sturdy, universal regulations.

With an uncertain future where robots seem extremely likely to thrive and multiply, there’s no saying how we’ll manage to defend ourselves against these killing machines.

Although human ingenuity will always find ways to tackle such problems, countless innocent lives might be lost in the process.

To end this on a brighter note, if I come across a patent for an EM shield, I will make sure to share it with my faithful readers.