Putin Ready to Aim at Europe and the U.S. if a Certain Line is Crossed 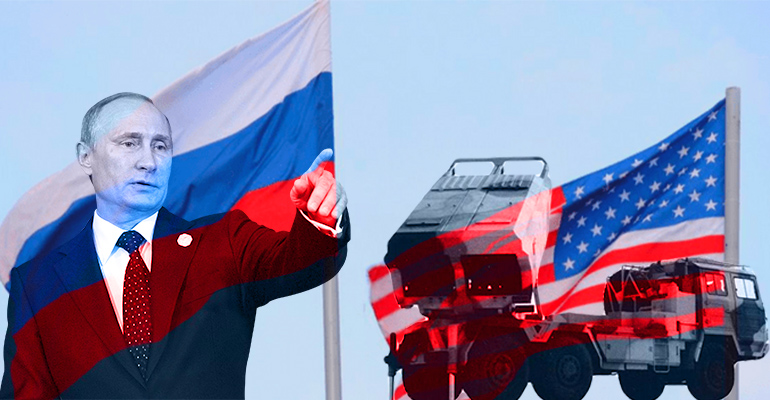 It appears that a new arms race is setting off between two world superpowers – Russia and the U.S., with Europe as the most likely battleground.

Russian leader Vladimir Putin has pledged to use force against the U.S. and its allies in case anymore missile weapons are to be deployed in Europe.

Putin’s motivation was that any long-range weapons sitting so close to the Russian boarder count as a direct threat to the integrity of his country.

Although the Kremlin leader had very sharp observations regarding the U.S., he stressed that Russia is not looking to pull the arms out of the locker and will avoid making the first move towards deploying and directing missiles towards the U.S. and their European allies.

It’s their [U.S. politicians] right to think how they want. But can they count? I’m sure they can. Let them count the speed and the range of the weapons systems we are developing,” Putin boasted in front of Russian political leaders.

Concerns of a new arms race have sparked after the U.S. and Russia failed to reach an agreement regarding the Cold War-era nuclear pact, signed by Ronald Raegan and Mikhail Gorbachev in 1987, which forbid all land-based missiles with a range between 310 to 3,400 miles from being deployed.

Donald Trump accused Russia of formerly violating the treaty and continuing to do so to this day, therefore rendering it obsolete since the other side was not keeping to its part of the bargain.

On the other side of the fence, Russia has denied any such accusations and has retaliated using the same suppositions.

Therefore, as of this February, the U.S. has withdrawn from the treaty.

Unfortunately, there is no progress,” said Russia’s Deputy Foreign Minister Sergei Ryabkov after the Beijing meeting where both sides were present.

As far as we understand, […] the next phase begins, namely the phase of the United States stopping its obligations under the Intermediate Nuclear Forces Treaty (INF), which will evidently happen this coming weekend.”

Throwing the guilt on the Russians, undersecretary of state for arms control and international security affairs Andrea Thompson has said there’s nothing to do in this regard than to put an end to the decades-long treaty.

The Russians still aren’t in acknowledgement that they are in violation of the treaty,” she said in an interview for Reuters.

With what appears to be a classic cat and mouse play between the two states, where there are accusations on both sides but evidence fails to reach the table, we can only let time reveal the outcome.

For now, it looks pretty grim, especially for Europe which sits in-between.

However, with both the U.S. and Russia not wanting to be perceived as the black sheep, there’s no saying who will make the first move that will trigger a direct arms confrontation.

For now, we can safely get about our prepper’s business and prepare for what’s to come.

With so much foreign pressure lately, I believe we should enjoy each day like it is our last one.